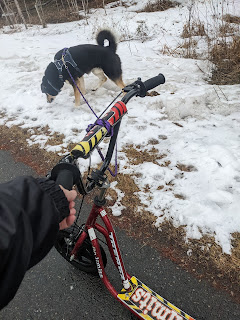 I promised to share some funny stories during the April Foolish Follies Theme and I haven't found the time to keep up on the blog.  So today's Foolish Follie is all about showing that even Dog Trainers make mistakes or errors in judgement.

The Great Squirrel Caper starts out simple enough as Azul and I were doing some pulling practice using a small scooter.  Before I ever attached Azul to the scooter I taught him basic directional cues; stop, wait, left, right, Go Go (to speed up and pull).  We were only practicing on nice straight and flat trails or roads with low distractions around.

So here we are riding along on a dirt road to no where when I see a squirrel in the center of the road...

The options fly through my head are stop and watch the squirrel at a safe distance or go for it and see how fast Azul can pull as we have a nice safe long stretch ahead of us.  (I chose wrong!)

I decided to let Azul chase the squirrel figuring it would just turn and run up a tree.  Instead the squirrel decided to run about 50 feet down the center of the road.  Azul picked up his top speed ever before the squirrel turned toward a tree.  Azul had no problem changing direction and stopping at the tree.

However my almost 200 lbs on wheels moving 15-20+ miles an hour can't simply stop on a dime.  I had practiced letting go of the scooter and having it pulled out in front of me and thus dragging behind Azul for emergencies.  But I never expected to have the scooter suddenly pull behind me while my body continued to be thrust forward.

A few other mistakes I made prior to giving Azul permission to chase the squirrel included not wearing proper gear.  I had been wearing jeans and hiking shoes that offered more support in the case of rapid dismounts.  But this particular day was extra warm so I wore my shorts and tennis shoes.  Had my legs been covered, I may have only ended up bruised and sore.  Instead I ended up with road rash pretty much all the way from ankle to knee on both legs and one arm.

Trigger warning!  The pictures at the bottom of this post are graphic so don't go that far if you don't want to see injuries!

After a quick assessment of bones and spewing a few choice words I slowly stood up and began the walk home.  A few feet later I stopped and pulled out my phone calling my son to come pick me up since I was only a mile away from home.  By the time I got home just 5 min later the pain was starting to hit full force, especially when I had to scrub the stones from the dirt road out of my wounds.  I probably should have went to the ER but with a big first aid background in emergency services I decided I could treat at home.

It was hard to walk for a week due to the sore muscles and amount of road rash on my legs.  And I had to wear bandages to keep my legs clean for nearly 2 weeks.  It was a rough start to my summer!

Did I give up on training with the scooter?  NO But I learned my lesson about watching the excitement levels of my dog to make sure he would be able to follow the directional cues.  When something is too exciting our dogs, especially adolescent dogs, will struggle with following any directions we give them.  I try really hard to teach Azul to have a brain at levels of higher excitement, but he still has limits.

So the real lessons here are know your dog and their abilities, choose your environment wisely based on those abilities, and wearing the proper gear for the job applies to the handler as well as the dog.

STOP HERE if you don't want to see graphic picts. 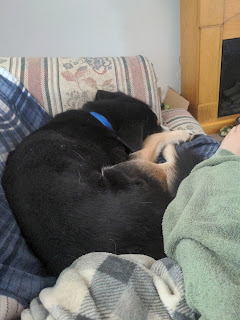 Azul tending to my needs while I rested on the couch after treating my injuries. 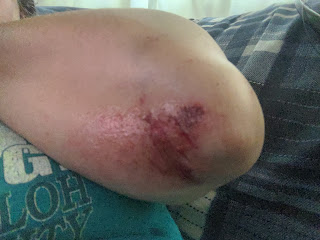 My elbow was not as big as far as coverage but it was the deepest injury. 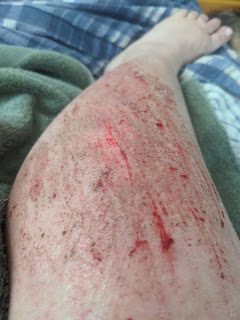 And this is pretty much what both legs looked liked.

By Yooper Paws of Love No comments:
Email ThisBlogThis!Share to TwitterShare to FacebookShare to Pinterest
Labels: Foolish Follies

Yooper Paws of Love
My name is Penny Beeman and I own Yooper Paws of Love page. I created the Facebook page mainly to highlight the training I was doing with my own dogs. The page then morphed into a training page to help other people train their dogs as great family members, working dogs, and Service Dogs. Which led to creating this webpage.
Newer Posts Older Posts Home
Subscribe to: Posts (Atom) 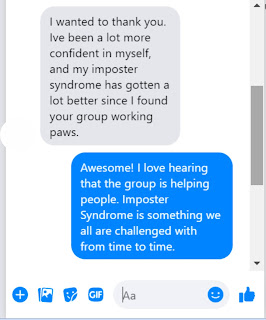